I’m planning on building a salary calculator based on the data from played around with some of the numbers earlier. This time I’m planning on going a lot deeper.

I want your help and feedback! I want to know what would make a calculator most useful to you. Feel free to poke holes in my methodology and tell me how a real data scientist would handle this project.

In this post, I’m going to outline some initial findings as well how I’m planning to approach this project. All of the information below is based on a narrow subset:

Regarding zip codes, some people only entered a portion of their zip for privacy sake. In the final analysis, I plan on taking into account the ~200 US individuals who did that.

So I’m using something called a multiple linear regression to make a formula to predict your salary based on specific variables. Unfortunately, the highest Coefficient of Determination (or R2) I’ve been able to get is 0.37. Which means, as far as I understand it, that at most the model explains 37% of the variation.

When we apply the model we get something called residuals, which are basically the difference between what we predicted and what the actual salary was. The standard deviation on those residuals is $20,000. Which means that our confidence range is going to be +/- 20-40k. That to me doesn’t seem like a great range.

There are a few strong indicators

Let’s take a look at what we get when we do a multiple regression with the Excel Analysis ToolPak addin: 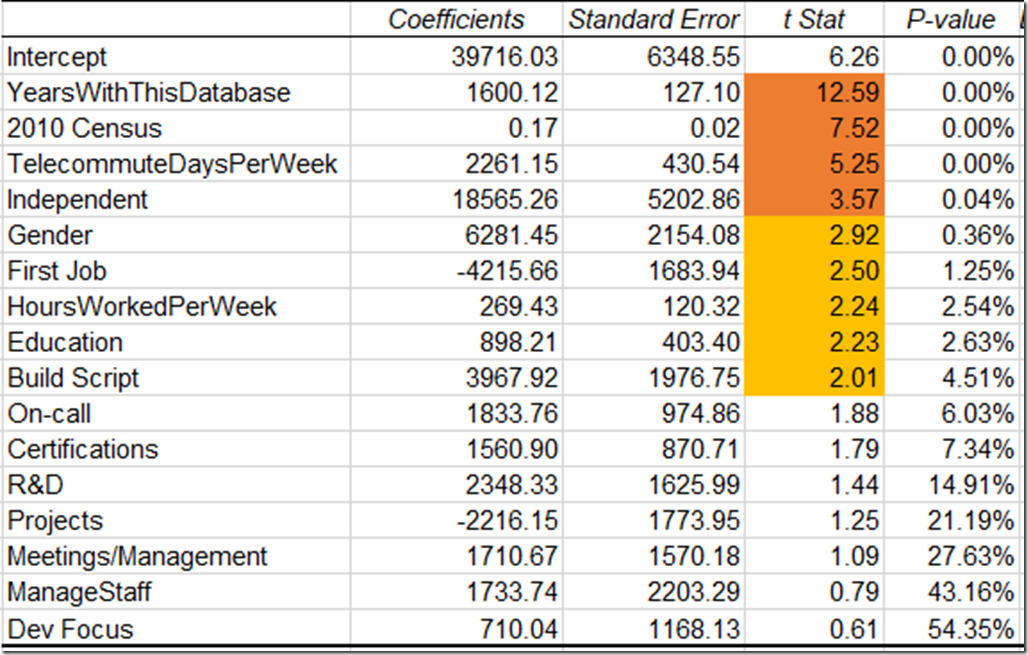 The two biggest factors by far seem to be how long you’ve worked and and where you live. In fact, we can explain 30% of the variance using those two variables:

The two other variables that are very strong are whether you telecommute and whether you are independent. When we add those, our adjusted R2 goes up to 33%.

Then after that we have a handful of variables that have a less than 5% chance of being erroneous:

There are some interesting correlations

Part of doing a multiple regression is making sure your variables aren’t too strongly correlated or “collinear”. As part of this, is possible to find some interesting correlations.

So here is the current outline for this blog series:

So let me know what you think. I plan on making all of the data and code freely available on github.