This week’s T-SQL Tuesday is about a time that you solved a difficult technical problem. Unfortunately my brain doesn’t store events that way, so I can’t think of any good stories. Instead, I want to talk briefly about how games have made me a better programmer and a better troubleshooter. 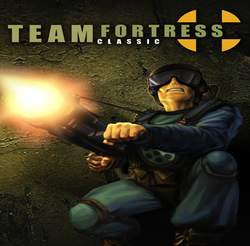 The first game I want to talk about is Team Fortress Classic. It’s a team based shooter from the late 90’s. I used to play this game all the time. But I did even more than that, I would make custom levels to play on with other people.

Mapmaking for TFC, was generally a simple process. You would create simple polyhedrons and then apply textures/patterns to them. Then you would place non-terrain objects, called entities, inside of your terrain. Everything is pretty straightforward…until you get a leak.

In my case, you encase half the level in solid rock, so to speak. I would just make a big cube and cover up half of the level. If the level compiled, I knew my leak was somewhere in that half. Then I just kept repeating with smaller and smaller cubes.

I do the same thing all the time in my professional life. I’ll comment whole swathes of code. I’ll jump to half-way to the data pipeline to see where the error starts. TFC taught me to keep cutting the problem in half until I find it.

Guessing the secrets of the universe with Zendo

Undoubtedly proof that I was destined to be a programmer, one of my favorite board games ever is Zendo. It was actually one of my nicknames in college. It’s got a silly theme about discerning if something has the Buddha nature. In reality, it boils down to one player making up a rule, and everyone else trying to determine what the rule is.

If it sounds easy, I dare you to play something similar over at the New York Times. Chances are you are going to get it wrong.

The biggest thing Zendo taught me, was fighting against confirmation bias. It taught me to ask “What would prove my theory wrong”. Good troubleshooting involves guessing a cause, determining a test that will give you new information, and then running that test.

That test might be running a simpler version of a query that’s failing. It might mean adding a breakpoint to your code and inspecting variables.

Learning how to think systematically about this sort of thing has been tremendously useful.

Learning outside of programming

Troubleshooting is very often a set of skills and approaches that don’t need to do anything with technology per-se. I think looking at how we can get these skills in other places, like games can be very useful.

Speaking of other sources, there are two book I can recommend wholeheartedly. The first is How to Solve It which is about how to solve mathematical problems, but it provide a number of ways to break down a problem or approach it from different angles. The second is called Conceptual Blockbusting. It focuses on the nebulous issue of how we think about problem solving. It’s very much a book about thinking and I definitely enjoyed it.

1 Only after writing this blog post did I find an article explaining out to get the level editor to tell you exactly were the leak is. Sigh.