Today I’m going to be presenting on DAX for the PASS BI Virtual Group. The focus is on all the hard mental concepts of DAX. If I could sum up the talk in one picture, it would be this: 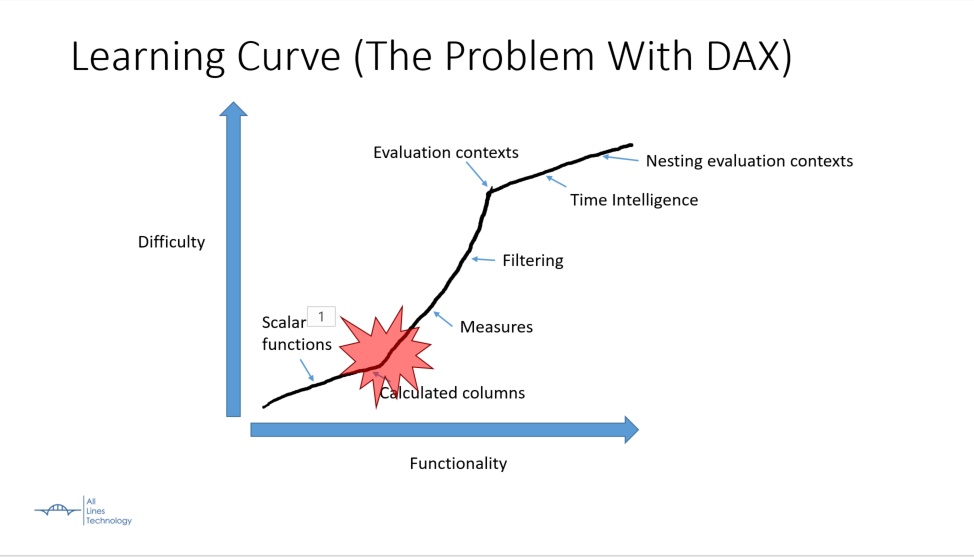 That red area is where I banged my head when learning DAX. The learning curve shoots up wildly in the middle of learning the technology, instead of a slow gentle curve. This presentation covers the middle parts that are key to understanding DAX.

Here are the slides for the presentation: Introduction-to-DAX-2017-03-30

Here is the recording:

Here is the talk by Marco Russo I mentioned in my presentation: Optimizing Multi-Billion Row Tables in Tabular

During PASS Summit, I wrote a post about the broadening data platform. I talked about the term Data Professional, and how I feel how it describes the changes going on the in SQL space. Here’s the problem: It’s a terrible guide. It’s a great description, it’s a wonderful attitude, it’s an ambitious goal; but it’s a terrible guide.

Being a data professional means being a jack of all trades. It means being a renaissance man (or woman). It’s means a career plan that looks like this:

And then you end up with Buck Woody telling you you are trying to do too much, cut it out kid.

@SQLGene Always is. But you can’t be an expert at everything. Pick something needed, do it better than anyone.

I’m not saying don’t learn Docker or Powershell. If you don’t learn those things, Kevin Feasel will warn you about becoming homeless. And who wants that.

@DaniSQL @feaselkl @sqldatapartners that I’ll be living in a van down by the river and starve to death. (2/2) True story.

Ultimately, I think it comes down to two quotes:

If you don’t know where you are going, any road will get you there.

Two roads diverged in a yellow wood,
And sorry I could not travel both
And be one traveler,

I took the one less traveled by,
And that has made all the difference.
-Robert Frost, The Road Not Taken

For me, I’m looking into Data Science. The problem is I’m not sure what Data science actually is! What I know for sure is it involves R and pirate jokes. We’ll cover that in next week’s blog post.